11 Sayings of the Prophet to Inspire Optimism

Those who don’t know him and haven’t studied his life, often think of Prophet Muhammad’s teachings to be full of negative or harsh messages. Many seem to be fixated on his sayings about the Day of Judgement and Hellfire, while conveniently ignoring his vocal messages of glad tidings and productive work.

After all, the mission of Prophet Muhammad, peace be upon him, was described by God as follows, “O Prophet, indeed We have sent you as a witness (Shahid) and a bringer of good tidings (Basheer) and a warner (Nazeer). And one who invites to Allah (Daee) , by His permission, and an illuminating lamp (Sirajan Munira)” [Al-Ahzab 33:45-46].

Prophet Muhammad was a beacon of hope for those around him. His ever-beaming smile would exude optimism. His words, whether of warning or of good news, inspired positive action.

Here is a selection of some powerful sayings of the Prophet to help us stay positive and productive in all circumstances.

1. Be a Bearer of Good News

2. Optimism is an Act of Worship

“Hoping for good is also an act of worship of Allah” (Tirmidhi and Hakim).

“There is no infection and there are no bad omens, but I like optimism… [Optimism is] a good word.”

3. Be Positive & Certain About Your Dua (Supplication)

“Supplicate Allah Almighty and be certain that He will answer your prayer” (Tirmidhi).

“The strong believer is better and more beloved to Allah than the weak believer, although there is good in each. Desire that which will bring you benefit, and seek help from Allah and do not give way to incapacity. If something happens to you, do not say, ‘If only I had done such-and-such.’ Rather say, ‘The decree of Allah. He does what He will.’ Otherwise you will open yourself up to the action of Shaitan” (Muslim).

5. Do Good Regardless of Others’ Treatment

“Do not be people without minds of your own, saying that if others treat you well you will treat them well and that if they do wrong you will do wrong. But (instead) accustom yourselves to do good if people do good and not to do wrong if they do evil” (Tirmidhi).

6. Be Patient & Positive in Difficult Times

8. Istighfar Makes a Way Out

9. Affair of a Believer is always Positive

10. Hope Prevails Over Fear at the Time of Death

Once our Prophet, peace be upon him, went to a young man who was on his death bed and asked him ‘How do you feel?’ The young man said, ‘I have much hope from Allah but I also fear for my sins’. The Prophet said, ‘The believer who has these two ideas simultaneously at such time, Allah fulfills his hopes and grants him security from fear’ (Tirmidhi).

11. Be Positive & Productive till Your Last Breath

“If the Day of Resurrection were established upon one of you, while he has in his hand a sapling (small plant), then let him plant it.” (Ahmad).

Got any Hadiths of the Prophet that inspire positive thinking? Feel free to share them along with reference in the comments below!

============
Taha Ghayyur is a writer, a consultant, and a community organizer. He works as a freelance writer with WordMatters.ca and as the Development Manager with Sound Vision, a pioneer in Islamic multimedia in North America. He writes and speaks extensively on issues related to Muslim youth engagement, education, leadership, communication, self-development and community development. 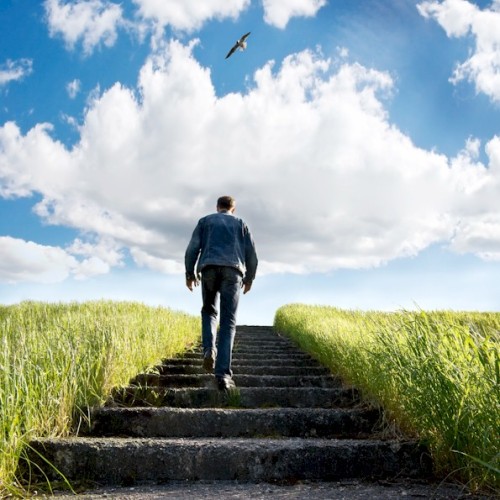 A few glimpses of Prophet Muhammad’s time-management principles that contributed to a productive and purpose-driven life.

He did not have access to an iPad or a Google calendar, nor did he have the luxury of a secretary who managed his appointments and itineraries.

Yet, Prophet Muhammad, peace be upon him, was the most disciplined and productive human being and leader known.

If you study the Sirah (life) of Prophet Muhammad, peace be upon him, with specific focus on his daily and regular routines, it’s an eye-opener: How meticulous he was in planning every aspect of his day; how he prioritized his life; how serious he was about keeping his word; how he planned for important events in the year.

Here are a few glimpses of his time-management principles that contributed to a productive and purpose-driven life:

1- The Prophet divided the waking hours into three segments daily.

Spiritual Development: This was his time dedicated to Allah. It was typically the late part of the night when the Prophet would re-charge himself spiritually for the next day and boost his resolve to face the challenges in his mission. It was an intimate communication with his Lord, the source of all strength and empowerment, through Qiyam (prayer), Dua (supplication) and Dhikr (remembrance).

Family Affairs: This time, usually in the evening on daily basis, was with his wives and other family members. Despite his exceptionally heavy commitments to the community and governance, the Prophet prioritized serving his family and spending quality time with his loved ones over many other responsibilities.

Personal / Social Affairs: Throughout the day, the Prophet would try to find time to attend to his personal needs. However, he dedicated most of this segment to serving his companions and to attending to the community’s needs. This is the session when men and women would come with their personal, marital, financial, spiritual and even health problems; this is when he would receive delegations from other nations and faith group; this is when he would attend to nerve-wrecking issues of politics, conflicts, and leadership.

2- The Prophet’s daily schedule revolved around the five daily prayers.

As Aisha, the wife of the Prophet explained, when the time for Salah (prayer) approached, he would drop everything and head to the Masjid right away; it was as if he didn’t know anyone or anything else when the Azan (call to prayer) was called.

This discipline to give up all your work and life’s distractions for prayer shows the role that Salah played in living a mission-driven life and leading an extremely productive community.

3- The Prophet planned for significant events in the year.

Whether it was performing Umrah or Hajj, or sending a delegation to a nation, or freeing the slaves from their masters, or any other religious, political and family affair, he had it all figured out in advance.

He was sensitive to his companion’s time and needs. His Khutbas (sermons) were brief, concise, and powerful. Most of his talks or recorded sayings were no longer than 3-5 minutes. His more elaborate sermons did not seem to exceed 10 minutes. He would not only keep his sermons short, but would even shorten the congregational prayers if he realized that there were seniors, nursing mothers, or children attending to avoid inconvenience to them whenever possible.

He was also particular about keeping his appointments. Once, the Prophet gave an appointment to meet one of his companions to collect payment for a business transaction. The man forgot about the appointment and showed up three days later. The Prophet, peace be upon him, who was still waiting at the location, gently reprimanded the companion, saying: “You have caused me some trouble young man. I have been waiting for you for three days.” (Abu Dawud)

5- Prophet Muhammad, peace be upon him, encouraged his family and companions to start their day early to maximize blessings and productivity.

The Prophet said, “O Allah, bless my nation’s early rising.” If he dispatched an army or a division, he did that early in the morning. (Abu Dawud & Ibn Hibban)

Aisha reported that the Prophet advised, “Rise early to earn your living and do your affairs, for it brings about blessing and success.” (at-Tabarani)

Fatima, the Prophet’s daughter, said that when he saw her still lying in bed one morning, he told her, “My daughter, get up and witness your Lord’s bounty, and do not be among the indifferent; Allah distributes daily bread between the break of dawn and sunrise.” (al-Baihaqi)

Only a person with a lofty mission and vision would be able to commit to rise early every day and make things happen.

6- The Prophet had a sense of urgency in doing good & warned others against procrastination.

He said, “Lose no time to do good deeds before you are caught up by one of seven calamities awaiting you:

Procrastinators don’t appreciate the time, means, and opportunity Allah gives them to be productive. As Prophet Muhammad, peace be upon him, once stated, “Good health and spare time are two of the blessings of Allah with respect to which many people are deceived.” (Al-Bukhari)
Each day has its own share of work and each time has its own share of obligations. Therefore, in the Prophet’s dictionary, there was no such thing as idle time.

7- The Prophet had a broad futuristic vision that transcended the current reality.

Surely, life was difficult and extremely disappointing in Makkah; from drought, to economic boycott, to personal insults, to psychological abuse, to physical torture, to death threats; he bore it all along with his family and the small community of believers. Even in Madinah, his enemies didn’t want him and his people to enjoy peace; war and treachery became a norm until the final days of his life. He had every reason to be depressed and lose incentive to stay committed to his divine mission.

Prophet Muhammad faced it all with a positive, futuristic vision that inspired his companions to keep struggling and to plan ahead. He consoled them with the assurance that Allah’s hand is with them. He gave them the glad tidings of real success in the Hereafter. He promised them contentment and spiritual heights in this life. He assured many of Allah’s pleasure with them. He was concerned about the future of the generations to come, making prophecies about heir successes. He was constantly looking for opportunities for strategic alliances to establish a sanctuary of peace. He was confident about the rays of hope on the horizon. He was not bound by the negative realities of his time; he envisioned a future beyond his time.

8- Prophet Muhammad’s shining legacy shows that we don’t need a lot of time to accomplish a lot of things.

In barely 23 years, the Prophet, with the help of divine hand and wisdom, brought about such a phenomenal transformation of a staggering magnitude that humanity has ever witnessed before or after his passing away.

There were some extraordinary companions of the Prophet, such as Musab bin Umair, Jafer bin Abi Talib, and Abu Bakr, as well as outstanding leaders, scholars and authors who lived briefly, but made a powerful impact on the generations of Muslims to come with their sincere intention and contribution.

A scholar like Imam An-Nawawi lived only 44 years, but left behind some of the most popular compilations of Hadith, inspiring millions of Muslims around the world every day! Malcolm X (El-Hajj Malik El-Shabazz) lived only a few months after embracing the orthodox Islam, but the impact he had on American Islam and civil rights movement in America in the years and decades after his tragic death is incalculable.

Time is limited. Death is certain. But our intention to live a productive life and to serve Allah and His creation will itself be enough to count as a positive action.

============
Taha Ghayyur is a writer, a consultant, and a community organizer. He works as a freelance writer with WordMatters.ca and as the Development Manager with Sound Vision, a pioneer in Islamic multimedia in North America. He writes and speaks extensively on issues related to Muslim youth engagement, education, leadership, communication, self-development and community development.